The First Fox to Touch the Moon 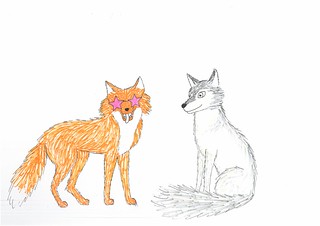 One day, Lee the Fox was walking along and was fed up with not being popular. He was talking to his best friend, Shadow the Wolf.

“Why am I not popular?” Lee asked.

Shadow said, “Not everyone has to be popular.”

Then Shadow said, “It’s not my fault you’re not popular. Try harder. If you touch the moon maybe you could become the first fox astronaut.” 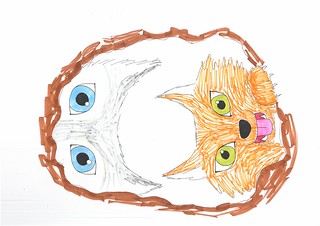 The next day, Lee and Shadow went to find parts to build a spaceship. While in the woods, they saw a hunter.

Lee and Shadow hid and thought of a plan to make a trap. They tied some wire and boards together to try and make the hunter trip, but it went wrong.

Instead of the hunter falling, they fell over their own trap!

The hunter saw Lee and Shadow in their own trap and tried to help them, but secretly he was trying to trick them.

Luckily, Lee and Shadow were really good at digging with their paws. They dug really deep into the ground, and when they came up, they were in a farm. They were trapped again!

“Where are we?” said Shadow.