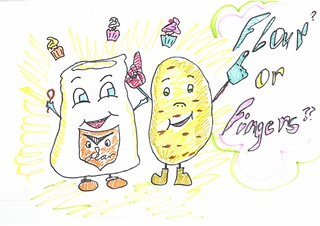 In a Rumpelsackel village, everyone was afraid of the Magic Finger King and his army of fingers and toes.

The king wanted to take the Rumpelsackels out of their homes and use them to make pancakes every day for him and his army.

One day, Rumpelia and her friend, Garfield the potato with hands, saw the army of fingers and toes coming towards the village.

“Ugh, this is so annoying. We need to stop the fingers and toes army from taking us and making us into pancakes. WE NEED RUMPELSACKEL RIGHTS!” exclaimed Rumpelia to Garfield. 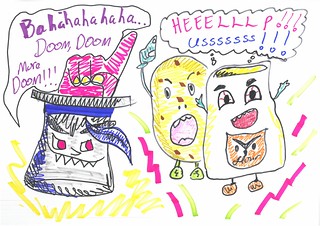 “I agree. We need to try and take them down,” Garfield replied.

They ran away to the Ice Cream Woods to start making a plan to recruit other Rumpelsackels to join them in their cause.

While they were talking, a clan of ice cream cones overheard their plans and wanted to help them in their quest to defeat the Magic Finger King.

Meanwhile, back at the castle, the Finger King received a report from his Finjas (Finger Ninjas) that the Rumpelsackels were planning to overthrow him.

“CAPTURE THEM! Bring them here and put them in the pancake dungeon!” shouted the king...