Frank and the Amazing Superalien 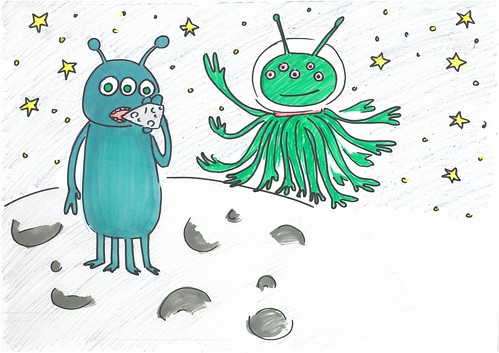 St.Philip the Apostle Junior National School, 2nd Class, 23rd April 2015
Once upon a time, there was a human who turned into a blue alien with four legs and three eyes. He was called Frank.

One day, far out in space, another human went to Mars and turned into a green alien with super powers.  His name was Superalien.

“I was turned into an alien as well!” Frank said to Superalien. “I’ve been waiting for a friend.”

“Are you going to be my chef?” asked Superalien.

“Its been a long time since I’ve seen someone who wants to be friends,” said Frank. 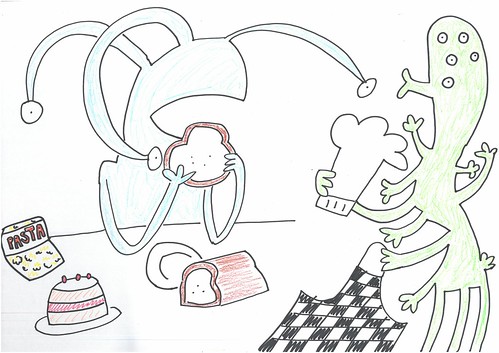 “Why does nobody want to be your friend? You look like a nice alien,” said Superalien.

“Nobody wants to be my friend because there is nobody else here,” replied Frank.

“We can control the whole galaxy together!” exclaimed Superalien.
Frank knew how to rule the galaxy because his evil father rules the galaxy.

In order to overthrow Frank’s evil father and rule the galaxy, Frank and Superalien needed to get to Jupiter.

One of Superalien’s powers was that he could turn into anything.  Superalien decided to give half of his powers to Frank.

Frank and Superalien flew to Jupiter on Superalien’s spaceship.  They brought pasta and cake with them.

When they got on the spaceship, they saw that it was broken and could not fly.  So Superalien decided to turn into a spaceship and fly Frank to Jupiter.

“Thank you for flying me to Jupiter,” said Frank to Superalien. 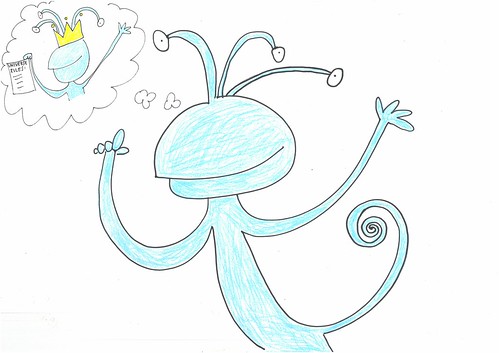 Frank’s evil father lived in an invisible castle on Jupiter but Frank knew how to get to it.

Frank and Superalien found the invisible castle because Frank’s evil father told him the secret.

Then, Frank and Superalien snuck in the invisible castle.

They saw a lot of riches and gold.  There were so many riches that Frank and Superalien tripped over a diamond.

The castle guards came and arrested them!...