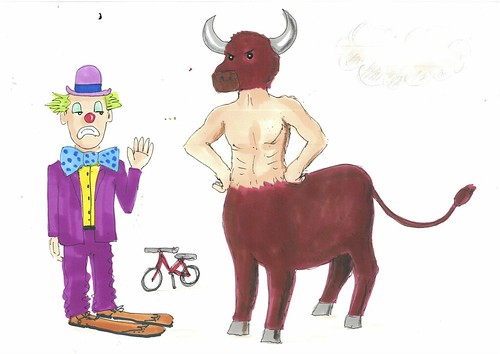 Once upon a time, there was a minotaur called Gecko and his best friend was Giggles the Clown.

Gecko lived in a mansion. He had built it himself in the woods.

One day, Giggles came over to visit Gecko and he brought him a chocolate cupcake with sprinkles and marshmallows.

Gecko screamed, “Aaaarrrgggghhhh, I’m afraid of cupcakes!!” He ran up to his room and tried to climb out his window.

Giggles cycled after him on his clown bike. “Do you not want this cupcake?” said Giggles, crossly. “Isn’t it your birthday tomorrow?”

“No it’s not my birthday tomorrow. I’ve never had a birthday,” replied Gecko, climbing back through his window. 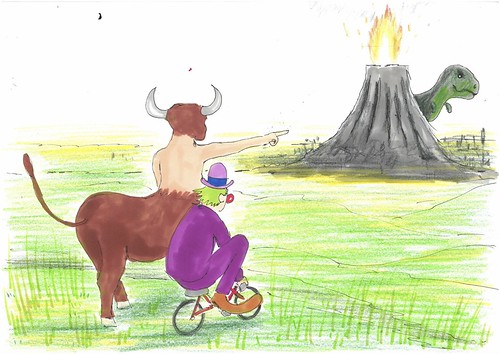 Giggles felt sad for his friend. “Isn’t your biggest wish to meet a T. Rex?”

“Thank you so much for remembering my biggest dream in the world,” said Gecko. “But where would we find a T. Rex?” he asked.

Giggles replied, “There is just a volcano over that hill. A T. Rex probably lives in there.”

So the two friends set off to explore...