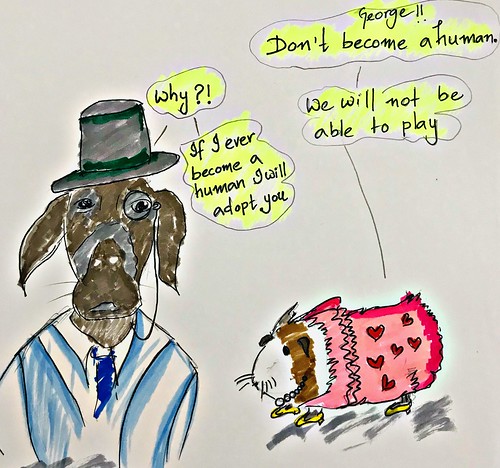 Once upon a time there lived a dog called George. He went to school at St. Anne’s and found a friend called Baz the Guinea Pig.

Baz and George became best friends and hung out at their owner’s house.

George wore a suit and Baz wore a dress. Baz and George had a perfect life -  only George wanted to be human.

The only problem was that the vaccines to become human cost too much and he was already in debt.

Baz told George, “Don’t become human or else we can’t play with each other anymore as you’ll be human and I’ll be just a pet.”

George told Baz, “If I ever become human, I’ll adopt you as a pet and then we’ll have an even more perfect life.”

“But what if you stand on me?!” Baz blurted out.