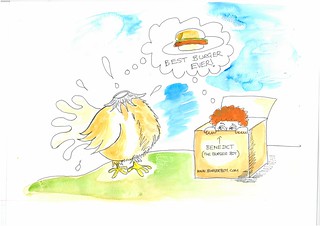 St Helen’s Senior National School, Portmarnock, 5th Class, 11 June 2015
Gerald the headless chicken was in a barn. He was born without a head.

Gerald decided to go to KFC. After he left KFC and was walking down the road, he found Benedict the Burger Boy in a box.

Gerald and Benedict combined themselves to create a chicken burger. 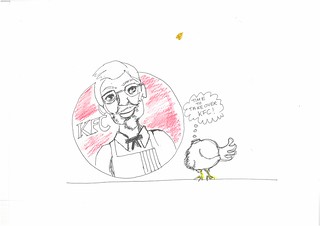 Anyone who went near them while they were combined developed a thirst for a chicken burger.

Gerald decided to introduce Benedict to his friend, the KFC Guardian.

Benedict asked, “Do you want to see our awesome combination?”

“No,” replied the KFC Guardian, “because we’re closing in two weeks, our CEO is leaving.”

Gerald would have to face his fear to become CEO...