Gizmo and the Neon Slug 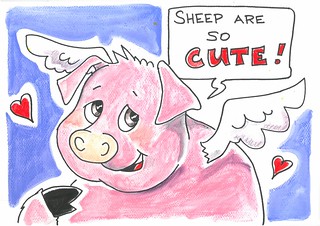 Once upon a time, there was a flying chubby pig named Gizmo and he wanted to become a pink chubby sheep, but he couldn’t because he was too afraid of fur.

Gizmo thought to himself, “Maybe my friend Billy can help me become a chubby pink sheep!”

Gizmo walked over to Billy’s tiny little house and knocked on the door. 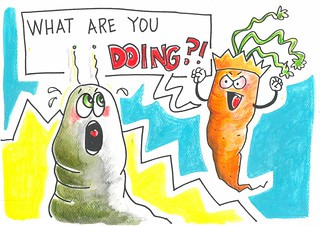 Gizmo went down to the lake to find Billy, and on his way to the lake he saw something really colorful coming out of the lake. It was Billy, the neon slug!

Just then, behind Billy, Gizmo saw the Vegetable King, who lived on the Vegetable Hill beside the lake. Vegetables were Gizmo’s greatest fear.

Gizmo tried to get Billy away from the Vegetable King without letting him know that the King was there, so he said, “Your mam is making your favorite worm soup!

But he was too late. The King spotted Billy and he screamed, “WHAT ARE YOU DOING NEAR MY VEGETABLE GARDEN, YOU SMALL, ROTTEN, SLIMY, COLORFUL SLUG, YOU??”...