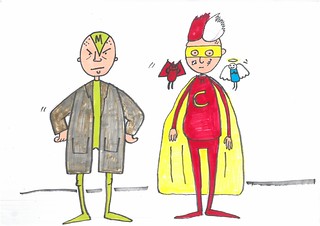 Once upon a time in the land of Butter, there was a lonely, young boy called Gravito.

Gravito wanted to steal all the superheroes’ powers. He was a villain from the dark side.

When he was eleven, Gravito found out he could control gravity and since then he always wanted to be evil.

One day, when Gravito was plotting his evil crimes, he met Clumsy Craig and instantly wanted him to be his partner in crime. 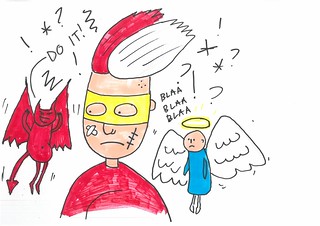 Clumsy Craig was an odd fella. He was always talking to himself and had a lot of banter with both himself and everyone else.

He always doubted himself because his conscience would pull him in different directions.

Gravito wanted to be his best friend because Clumsy Craig would get so much attention from all his banter. He also wanted someone to cheer him up.

One day, Gravito went to Clumsy Craig’s house to invite him over to play some football and have some lunch. 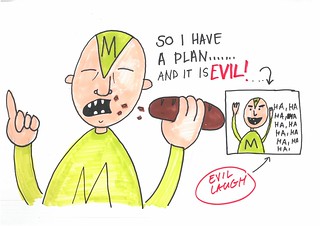 While they were playing football, Gravito cheated by changing the gravity so he would win.

“That’s not fair!” said Clumsy Craig, but then the evil side of his conscience told him it was fair.

“Good, that’s what I wanted to hear, so you can either like it or lump it,” responded Gravito.

While they were eating lunch, Gravito said to Clumsy Craig, “I have a brilliant idea. We should steal all the superheroes’ powers!”

Clumsy Craig said, “I think that’s a very good idea!” but then he closed his eyes for a second and said, “No, wait, this is actually a really bad idea. The superheroes are way too powerful and we’re not powerful enough…”