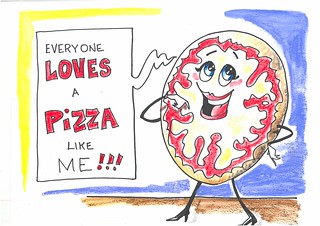 In an Italian city, there was a pizza called Patty Pizza. She loved her friend and came to his house every morning.

Her best friend was called Cheesy Pizza and they were neighbours.

One day, Patty Pizza told her friend her dream. “Guess what? My dream is to open a 80s pizzeria.” 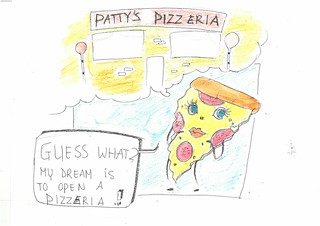 “There’s a building getting knocked down near the park,” said Patty. “I’d really like to build the new pizzeria with you, my friend.”

Cheesy was so excited that he threw some cheese in the air. It landed on his face, so now he was even cheesier.

The two friends got into Patty’s cheesy car and drove off to the park. It was a sunny day and there were flowers everywhere. 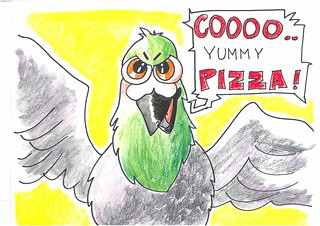 Patty was thinking, “There’s something behind me!”

It was a pigeon! He had orange eyes and a black beak. He had smelled the cheesy pizza, so he flew over and started pecking it.

This alerted the park ranger and she came over yelling, “Are you alright?”

The park ranger tried to capture the pigeon, but the pigeon was difficult to capture and started to fly away...