Impossible Guy: The Guy Who Saved the World 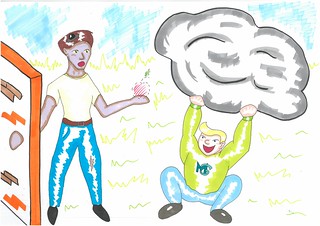 Mark used to be a normal guy before he turned into Impossible Guy.

One day, he saw a robot who looked like an alien monster and threw a potion at him. The potion had a robot formula in it that turned Mark into an alien robot.

Mark’s best friend, Mega Guy, came and saw that Mark wasn’t normal anymore. Then the alien monster came back, threw another potion at Mark, and turned him into Impossible Guy.

Impossible Guy said to Blossom Girl, “I want to date you.”
Blossom Girl said, “I will.” 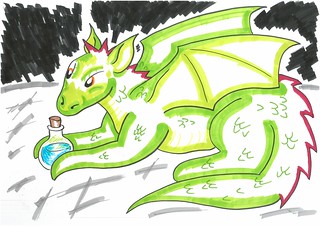 Then they kiss together. Impossible Guy thought Blossom Girl was so pretty. He said to her, “You are so pretty.”

Impossible Guy said to his best friend, Mega Guy, and his girlfriend, Blossom Girl, “Please can you help me go inside the secret lab?”

Mega Guy said, “There might be a portal in there that will take us to Mitgaard.”

Blossom Girl said, “I will help you only if you marry me.”
The three of them went to the trapdoor and saw Lightning, the fire-breathing dragon.

Impossible Guy said, “I’m so surprised that you’re old instead of a normal dragon!”

Then the dragon said, “I’m not old, I just had a potion and this is my disguise...,”