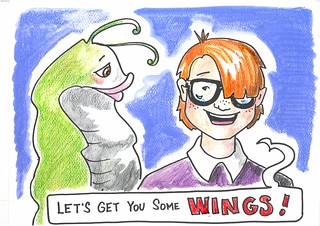 Once upon a time, in a town that no one ever knew lived a boy named Jack who was 13. His best friend was Sluggie the Slug Monster.

Jack said to Sluggie, “I wished we had a jetpack so that you could fly.”

Jack had an idea, and he said, “let’s go to the Ambition Store.” To get there they had to go down the street, turn right, turn left, then go down two miles. This Ambition Store was very ginormous. They found a jetpack and bought it. But when they went outside it started to snow!

They thought the snow might jam Sluggie’s jetpack, but they tried it out anyway.

Jack jumped onto Sluggie’s back to turn on the jetpack. The fire came out to start the engine. 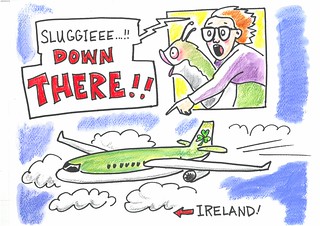 It worked for just a moment. Jack went up high above airplanes, but snow flew into the engine and clogged it.They both screamed, “Noooooo,” as they started to fall.

They landed on top of a plane that was going to Ireland. Jack said, “let’s go to a hotel.”

Jack was on Sluggie’s back and they slithered to the hotel.

When they got there they exclaimed, “oh no, we forgot that we have no money.  We spent it all on that jetpack.”

This meant that they didn’t have enough money to stay. How would they get back to Nerdville?