Jake and Reg, the Ice and Fire dragons 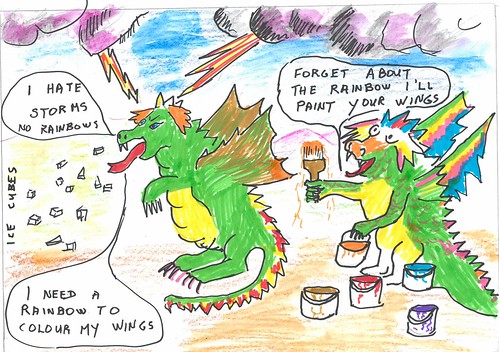 Once upon a time, there lived a dragon called Jake.  He could breathe ice!

He went on an adventure and he found a friend called Reg, who was a fire breathing dragon.

Reg and Jake lived in a cave in the Dragon Kingdom.

Jake wished he could have rainbow wings because he thought his own wings were very boring.

The only way he could do this was to fly through a rainbow doing a back flip!

“I wish I could go to a rainbow” Jake said, “but thunder would be in the way.

Reg said “Me too, I’m so scared of thunder”

The problem for the dragons was they couldn’t get to the rainbow in time because the journey was too long.

They went outside and they could see storm clouds in the distance.

But then the door slammed shut and they were trapped outside…