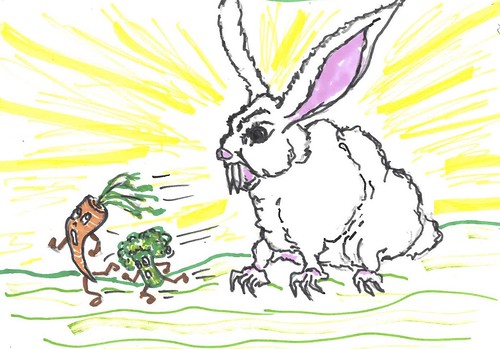 Jcarrot met Jbroccoli one day in the shopping centre, waiting on the conveyor belt to be bought.

“Hi, my name is Jcarrot,” said the carrot.

“My name is Jbroccoli but you can call me Jbrocky,” said the broccoli.

After they were scanned, Jbroccoli jumped into the same shopping cart as Jcarrot.

They thought they were on their way to Foodtopia but little did they know that they were going to be eaten!

When they got home, Jbroccoli and Jcarrot overheard the father of the house saying that he was going to make dinner. 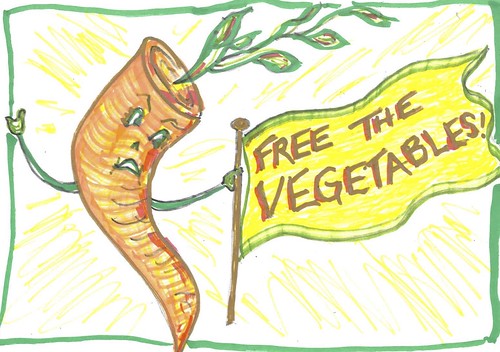 The two friends decided to escape to Foodtopia.

Jcarrot and Jbroccoli looked out the window, trying to figure out how to escape.

They saw a hutch with a big, fluffy bunny in it!

The bunny’s name was Hazel and she had really sharp teeth.

She was so fluffy that anything that got caught in her fur would be trapped.

She also had hungry babies that needed to be fed.

Jcarrot said, “You distract the rabbit and I’ll make a run for it.” 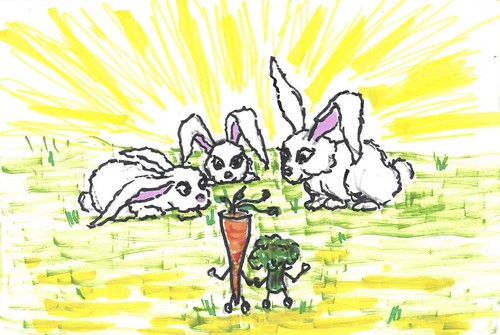 ​Jbroccoli was not a very clever vegetable. “No problem. Sounds like a good plan.”

While Jbroccoli was speaking, Jcarrot had already run away. Hazel the bunny was looking at Jbroccoli and foaming at the mouth.

Jbroccoli thought it was a good idea to pet the bunny and make a new friend.

Meanwhile, Jcarrot was feeling guilty about abandoning his friend…