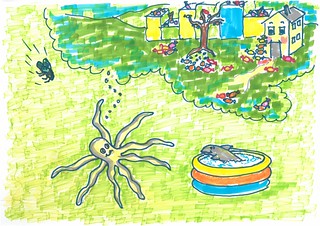 It was Halloween and Jeff the Octopus was ready to go trick-or-treating. Jeff was an unusual octopus. He lived on land.

Jeff was really hoping that Fred the Fly wouldn’t fly around him again.The last time Fred was around, he went up Jeff’s nose.

Jeff thought, “I wish the whole world would turn into sweets.” He was really good at trick-or-treating because he had eight arms and could hold a basket on each arm.

Jeff’s best friend was Joey the Shark. He lived in a paddling pool in Jeff’s back garden. They were going trick-or-treating together. Jeff had to use one of his arms to pull Joey along.

“Be careful when you’re pulling me,” Joey said, “You ripped the paddling pool last year.” 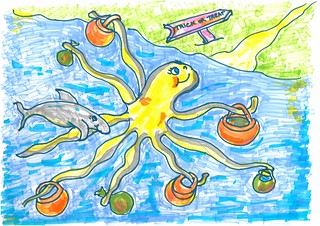 Joey was glad because it was raining. Last year, the water in his paddling pool had splashed all over the road as Jeff pulled him along.

Jeff went to the first house with his seven baskets and one arm pulling Joey along, behind him. He rang the bell with one of his arms.

A man came to the door. He saw Jeff and started screaming. The man slammed the door in Jeff’s face.

Jeff went to the next house. He rang the bell, and Fred the Fly flew out of the letter box. Jeff ran away and left Joey behind! Joey was so scared!
Fred chased after Jeff. “Do you want to be friends with me?!” he called out, but Jeff kept running and tripped over a kerb.

Fred landed on Jeff’s nose. “Let’s be friends!” he said, “I’ll turn the world into sweets.”

Jeff was still afraid, but he thought, “Mmm, sweets...”