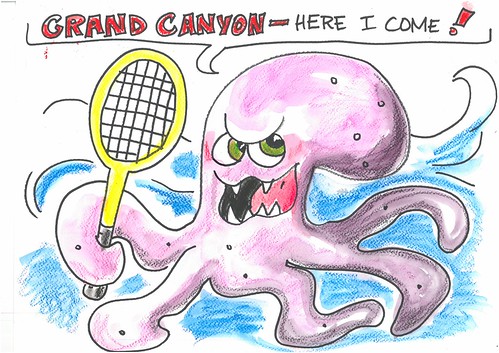 Jimmy John had a best friend called Bobby Jones. Bobby Jones was a mermaid boy who lived in the sea.

One evening, Bobby Jones suggested, “We should go to the Grand Canyon to play tennis.” 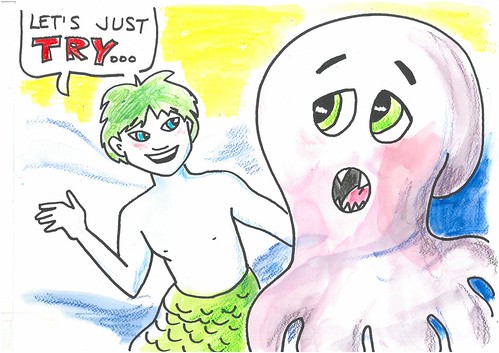 “We’ve never been out of water!” said Jimmy John. “We wouldn’t have our air to breathe.”

The two friends made a plan.

The plan was to store water in a helmet (which was a fishbowl) so that they could breathe on land.

They set off on their travels. It took them a week and a half to get to the Grand Canyon.

But they forgot to tell their parents they were going! 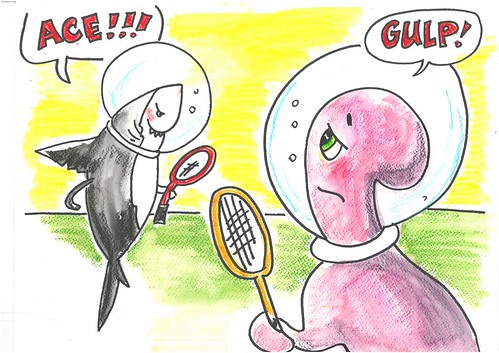 When they reached the Grand Canyon, they saw Jeff the Shark. He was playing tennis with one of his gang.

“Oh no! Jeff the Shark, my worst enemy, is here!” said Jimmy John. “We should just go home, there’s no point in doing this.”

“But we’ve come all the way to the Grand Canyon,” said Bobby Jones. “We shouldn’t head back...you know this is your greatest dream!”
“Let’s risk it and stay here,” agreed Jimmy John.

Just then, Jeff the Shark challenged Jimmy John and Bobby Jones to a Grand Slam challenge...