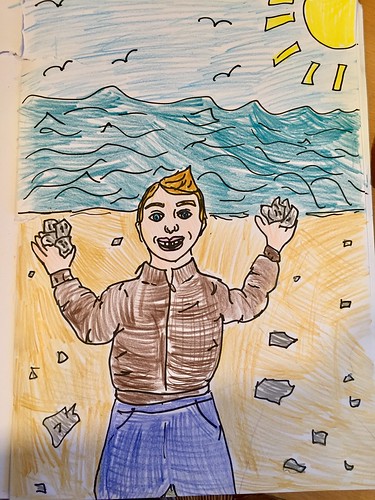 Once upon a time there was a human called John, who was a rock picker. His dream was to become a billionaire.

One day John went to the beach and started picking up rocks that he liked. He worked for a man called Mr Kava.

Mr Kava reminded John of Goro a lot – because he is meany, grump and acts like a four armed monster.

A squirrel called Susie ran out onto the beach. John took out his SquirrelTalkOMeter and put it on her neck.

“Do you need help picking up the rocks” Susie asked John.

The next day they went to Egypt and they saw a house in the middle of nowhere – it was surrounded by emptiness and sand!

Then he heard a big noise and hid. After that John peeked out from where he was hiding behind the house.

Goro had Susie in his hands and was giving her to Mr Kava.

“Goro, your family can have Susie as a pet”…