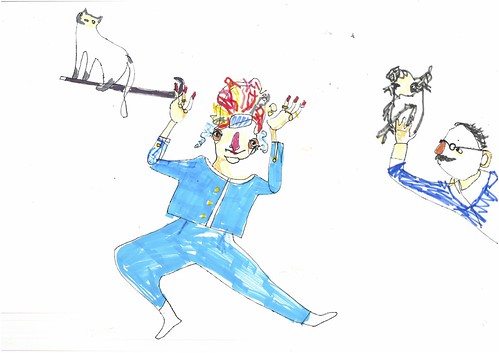 Once there was a crazy nanny called Samantha. One day, she was at the kitchen sink, dyeing her hair rainbow coloured.

Some of the dye splashed on to her white dog.

The dog started barking at her. “We’re twins now!” she said.

Samantha rushed to get a towel but she had to trudge through her jungle of a sitting room. All her animals were having a secret game of poker.

“Nobody can find out that you can play poker, or else the new president Donald Trumpet might come to take you all away!”

The monkeys pulled down the blinds so no one could see them through the window.

Just then, there was a knock at the door. Samantha was afraid that it might be Donald Trumpet. She looked through the peephole. It was her best friend, Moustachio so she let him in.

Moustachio had a moustache that was 30 inches long. He was also very tall and skinny and from France. 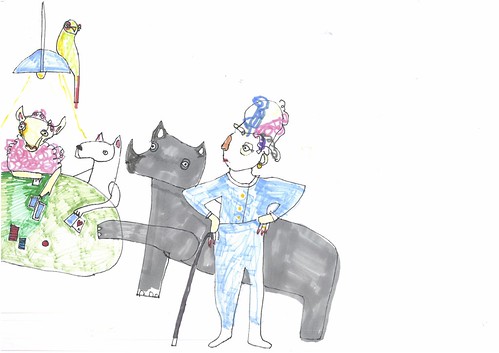 “You should really get a bigger house, because I can see your rhinos playing poker through the ripped blinds.”

“Oh yes, the tigers and cats ripped the blinds yesterday while they were playing tag with the postman!” said Samantha.

“Are you sure that the postman wasn’t just running away?” asked Moustachio.

Moustachio turned on the telly and the news was on. Donald Trumpet announced, “From this day on, there is a limit of only three pets per house!”

Samantha was flabbergasted and stood there with her mouth open...