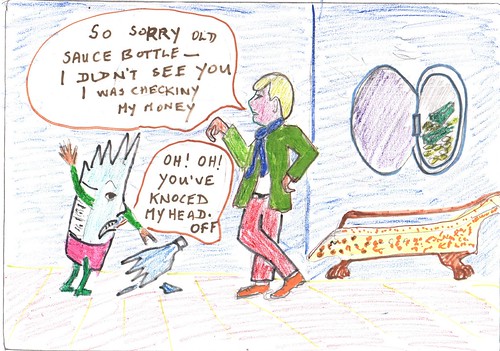 It all started one day in Jim’s giant vault.  He had been watching his favourite TV show “Runge McDuck” the night before as he had so much money he could afford to make his own television show.

After Runge McDuck was over he had seen some shadows. He was checking to see if his money was still there after seeing them.

As he turned around he knocked Anthony, his favourite ketchup bottle on the ground and to his horror, he broke!

Anthony was very angry and Jim was afraid that he would cut himself on the glass.

“What’s wrong with you?” Anthony shouted, “I’m still the same bottle as I used to be, why are you scared of me?”.

It was only at this moment that Jim wished to have a marshmallow friend as marshmallows aren’t dangerous! 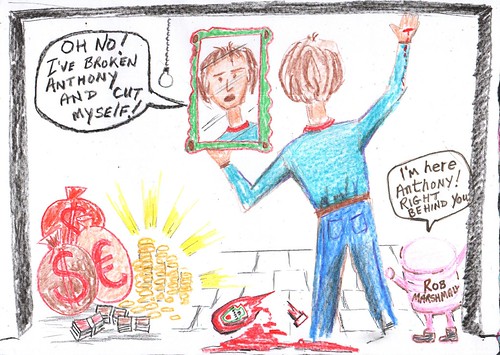 Jim picked up a piece of the glass to look at himself, “Mirror, mirror, in my hand, who is the fairest (and richest) in the land?”

But he cut himself slightly and his reflection vanished.

He dropped the piece of glass which shattered against the very expensive tiles.

“Look what you’ve done to me “ Jim exclaimed, I’m going to unfriend you on Facebook.”

But then he remembered he had some marshmallows in his press…