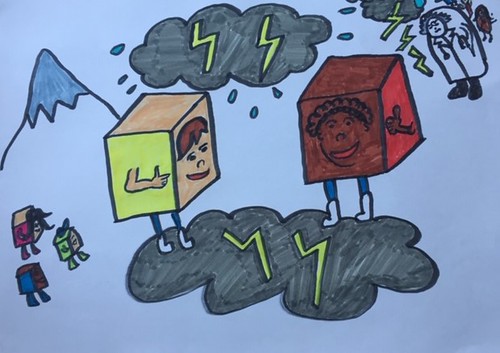 It was a Saturday morning and Kevin the cube looked out the window. There were thunderstorms outside.

Kevin kind of liked thunderstorms because he used to live in storms.

“Please don’t come near me,” said Kevin. He was scared and nervous.

“Leave him alone!” shouted Bob, and they started fighting.

He used his storm powers to try and fight back. Out of nowhere, Doctor Nakenpoo’s family showed up to help.

Kevin was outnumbered. Kevin’s family also showed up to help.

“Go away!” screamed Kevin. “Go back to the sugarloaf!”

“We will after we teach you a lesson!” replied Doctor Nakenpoo.

A storm came along, and Doctor Nakenpoo hated storms because they were his weakness.

He and his family barely survived, but they managed to escape...