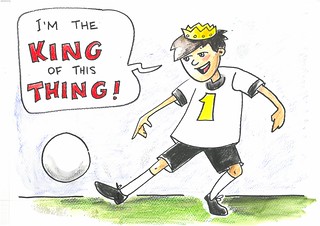 ​Powerstown ETNS, Tyrrelstown, 2nd Class, 18 June 2015
One day King Rich was playing football. He was playing the finals against a team called the Flippy Floppy Fighters.

King Rich’s team called Team Winners and his number was 1.

When it was half time, King Rich’s team scored one goal. When there was twenty minutes left, Team Winners had two goals and the other team had zero goals.

Suddenly King Rich saw a ghost on the pitch, so he ran away. While King Rich was gone, they put another player on – Freddy, pair of glasses who plays football.

King Rich didn’t know that it was a NICE ghost. He was VERY scared of the ghost. The King didn’t know it, but the ghost was helping his team. 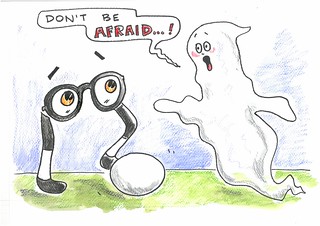 “I’m really scared, WHAT can I do?” said the King.

Because he was running, he ran into another player and he got a yellow card as a warning.

“I’m trying to help you!” said the ghost.

There was one minute left in the match…