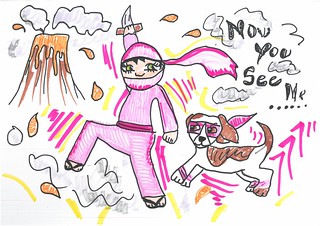 Once upon a time in Japan there lived a ninja called Ellie.

She trained for five years as a ninja and learned how to turn invisible.

The next day she found a dog who was also trained as a ninja. His name was Jack. 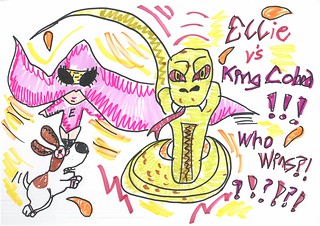 “My name is Ellie the Ninja,” Ellie told him.
They became friends. Ellie was so happy that she had found a pet. They always protected each other and stayed together. Every time they had to fight their fears, they worked together.

One day Jack found jewel and it was made of lava. As soon as Ellie touched it she became the Lava Queen. She had a lava crown and a lava cape and everywhere she stood became lava.

After a year, a king cobra came slithering into her kingdom. The cobra wanted to take over the kingdom. He could control all snakes and scorpions. When Ellie came close to him, he started to melt.

But just then the cobra stung Jack...