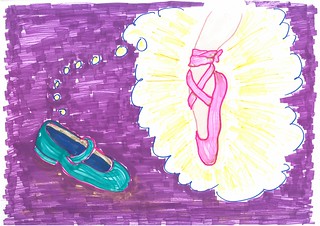 Once upon a time there was a shoe called Lily and she lived in Shoeville.

It was Lily’s birthday and she got a doll. She opened the gift and dropped it.

She ran upstairs to her room, locked the windows and her door and went under the blankets.

When Lily opened the door, the doll was right in front of her. She shouted down into the kitchen, “Get the doll out of here!”

The doll started to walk towards her. The doll said, “Hello.”

The doll’s name was Emma. Max started to invite Lily’s friend, Billy the basketball, over to the house. “H..h...hello?” stuttered Lily to the doll. 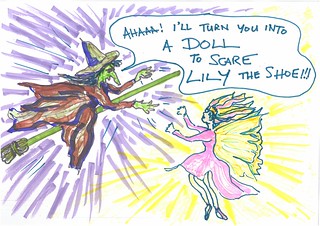 The doll was actually a fairy who was turned into a doll by a witch.

The doll then said, “Help! I’ve been turned into a doll. A witch put a spell on me.”

Lily wasn’t afraid of the doll anymore. The witch had wanted to scare Lily because she hated children and children’s shoes.

Max and Lily had to try to make a spell to help the doll, whose name was acually Amia the fairy.

Max and Lily went down stairs and all her friends and family were there for a suprise party.