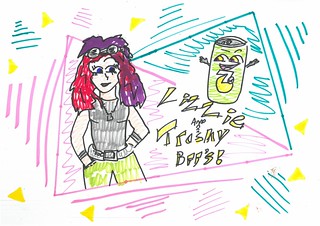 Once upon a time, there was a girl called Lizzie, who had a very ambitious mind. Lizzie was fifteen.

One day, Lizzie saw a dragon and she was scared. She was standing in front of the dragon.

Trashy the Trashcan would like to have had a friend who wasn’t so crazy.

“Trashy, stay over there,” Lizzie said. After that, she was speechless.

“Lizzie, move out of the way, the dragon is going to eat you!” screamed Trashy. 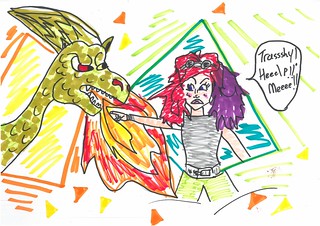 The dragon blew Lizzie away with the fire but the red side of her hair reflected the fire at the dragon.

Then Lizzie took out a sword to scare the dragon away. The dragon flew towards her, but then Lizzie lapped her.

Lizzie threatened the dragon and with all her anger she began to fly.

Trashy jumped into her bag and yelled out, “Hey! Wait up!”

Lizzie flew to Mars and when she got there she did ten flips. On Mars, there were spider-head aliens that tried to attack her. Lizzie took out her sword and threatened them.

The aliens were afraid of her, but they ran towards Lizzie and she ran towards them too. Then they ran away back to their home on the Milky Way.

The spider-head aliens weren’t really scared of Lizzie, they were afraid of the dragon that had followed her to Mars and was behind her...