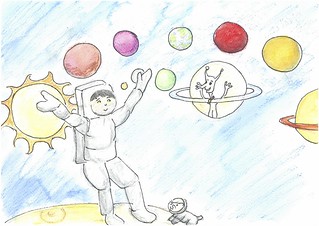 Once there was an astronaut called Michael. He had a best friend called Timmy. Timmy was a magical hamster. They were the bestest friends.

Michael’s dad was an astronaut, so Michael wanted to be an astronaut too. He was in his dad’s house, where he was building a rocket.

Michael’s greatest fear was to run out of oxygen when he was up in space. One day, he called Timmy to his dad’s house.

“Timmy can you help us finish the rocket? It’s too hard!,” said Michael.

BANG! And the rocket was finished in a flash! Michael said, “I’ve never seen an alien before, but I’d like to have a pet alien.”

Then Michael and Timmy went into the rocket. Timmy accidentally knocked Michael over, which caused him to press the Start button.
Michael tried to find his phone but he had left it on the table, so he couldn’t ring anybody for help. 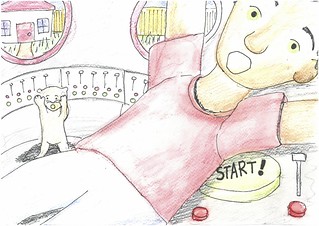 The rocket took off and in just two hours they landed on the moon.
Michael asked Timmy, “Timmy, Timmy, do you have any masks so we can play on the moon?”

“We’re in great luck, because when I was building the rocket I put masks in just for safety,” said Timmy.
So they hopped out of the rocket and Michael found an alien. Michael, Timmy and the alien were playing tag. Michael jumped and accidentally hit his mask on a rock.
“I can’t breathe!” choked Michael.

At the same time, Timmy realised that there was no fuel left in the rocket...