Skip to main content
Home Stories Lost in the Woods

Lost in the Woods

Once upon a time in Cornville there was a girl named Elizabeth. She lived in the woods just outside Cornville.

She was talking to her imaginary friend, Carrot.

“Yeah, I have the shades,” replied Carrot.

Elizabeth and Carrot had known each other since Elizabeth was born.

One day, when Elizabeth was on a field trip with school, she and Carrot got lost in the woods.

Because Elizabeth was getting older, she was afraid she would lose Carrot. She wanted another friend incase he left.

As she was wandering through the woods, she found a cottage.

She knocked on the door, and an ugly old woman opened it. She looked like a witch.

The old woman told Elizabeth to get inside the cottage. 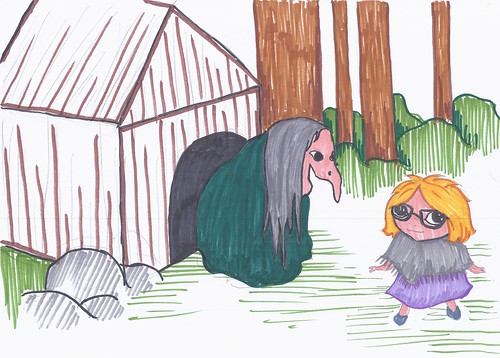 “The trees can be dangerous at night, dearie,” she said.

“Oh trees, why do you have to torture me everywhere I go?” Elizabeth groaned.

The witch had just died, and her last words were:

“I will always be there to protect you in your darkest nights, Elizabeth.’’

But what the witch said wasn’t true. She was planning to haunt Elizabeth for the rest of her life.

The old witch had built a house amongst the shadowy trees, and wanted to trick Elizabeth into staying there…