The Magical Adventures of Tinky Pinky 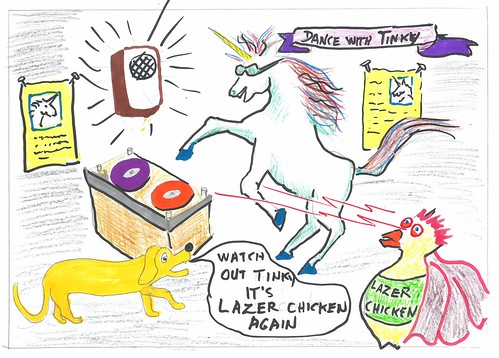 Once upon a time there lived a unicorn called Tinky Pinky, the greatest unicorn alive. He wanted to be a DJ and be called DJ Yonda.

He was training for a long time to be a really famous DJ.

One day he was at a dance party and he met this dog called Banana Joe.

They became friends because they liked the exact same songs and music.

“I love this song” Banana Joe said, “it’s called “Banana Pop” which is part of my name”.

“Me too”, said Tinky Pinky.

From that day onwards they were best friends.

One Friday, something terrible happened to Tinky Pinky.  He got lasered by a laser chicken!  It felt like a clothes peg pinching him.

“Ouch, that hurt!” and he went home screaming to his home which was a magical rainbow cloud house.

Then he got out his cloud phone and rang his friend Banana Joe:

“I’ve been lasered, guess by who?”

“Oh no, not by laser chicken?”