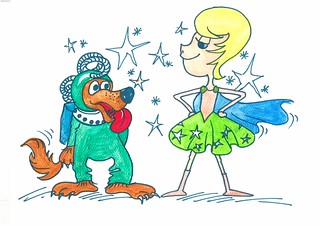 Gardiner Street Primary School, Dublin 1, 3rd Class, 17th September 2015
Once upon a time there was a little wolf, just born that day! His name was Malty the Spacewolf.

Malty had a mam, a dad, a brother and a sister. His sister and brother were very nice.

One day an alien came from space and controlled Malty’s brain. The alien put a curse on Malty so that he was afraid of humans. 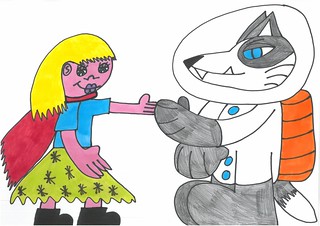 Alice came along and decided to chase after the alien but the alien got away!

“I can’t wait until the universe is mine!” said Malty. This was his greatest dream.

Alice replied, “Malty, if you listen to me, I will give you the whole universe....but you have to listen!”

Alice knew that they had to go to this huge waterfall. Here they would find a crystal that would unleash the curse.

It was buried in a treasure chest, underneath the sand, beside the waterfall...