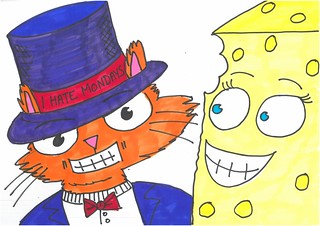 His plan was to steal the starfish from the pet shop, which could grant any three wishes.

He wanted to get it so he could put an end to Mondays and Tuesdays with his best friend, Laura the Parmesan cheese.

“I hate them because Cappucino Bob’s doesn’t open on a Monday or Tuesday and I need my coffee,” replied Bob. “My mam visits every Monday and Tuesday as well.”
Laura was emotionally traumatised by Bob’s mam because she had turned Bob’s cousin into the hat he was wearing. 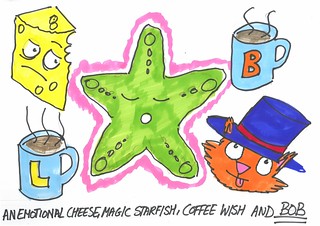 “Since your mam is so horrifying, I will help you get the starfish that turns into a dancing kettle.”

Laura walked in normally, before knocking over a fishtank. The water disarmed the CCTV, which made an electrical noise and shut it down.

Bob followed Laura in and spotted a Wanted poster with his name and face on it at the counter...