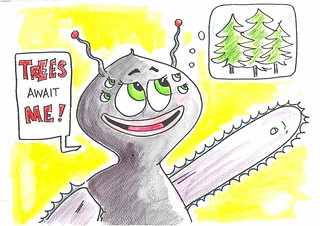 St.Kilian’s National School, Mullagh, 5th Class, 19th May 2015
Once upon a time, an alien lived in a shoe. He had chainsaw arms and his best friend was a zombie with candyfloss arms.

They could never shake hands.

The alien’s name was Jeff and Jeff liked living in his shoe because it was very comfortable. 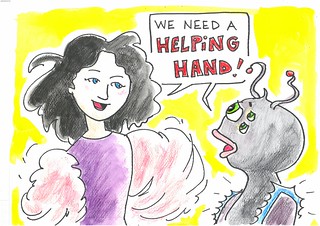 One day, when Jeff was in his house, a monkey snuck in.
Jeff was terrified of monkeys! He was so scared that he packed his bags straight away and went to his Dad’s boot.

“The monkeys are coming after me!” said Jeff.

If you stay, you’ll bring the monkeys.” 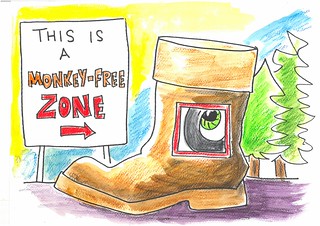 Jeff’s Dad was scared of monkeys as well.

So Jeff had to go to his best friend Floss’s house.

“I need a place to hide, the monkeys are after me and my Dad wouldn’t let me stay in his boot.

You need to help me to get over my fear so I can be a logger.”

On Jeff’s planet, all of the forests were full of monkeys.