“Mr. Grumbles and the Magical Puppy” 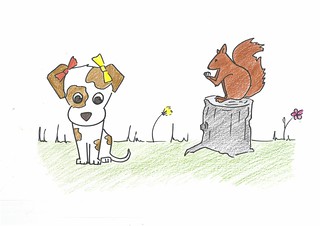 ​Belgrove Infant Girls School, Clontarf, 1st Class, 3rd June 2015
Once upon a time there was a puppy called Magical and her best friend was Scrap the squirrel.

Magical’s greatest wish was to one day have a family.

Her greatest fear was a man named Mr. Grumbles! Mr. Grumbles was a pirate who was mean and didn’t like puppies.

One day, Mr. Grumbles came to capture Magical and take her on his spooky pirate ship.

Scrap the squirrel decided that he had to save his best friend. Mr. Grumbles was actually afraid of squirrels!

“Get away, you little rat”, he shouted. 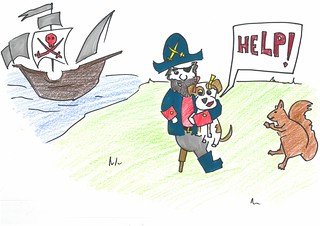 “I need my friend back”, said Scrap.

Mr. Grumbles sent his guards to chase Scrap and Magical.

They hid in a cave cottage in a forest. Mr. Grumbles’ guards searched but they could not find them so they went back to their ship and sailed away.

Magical and Scrap found a puppy called Brownie in the cottage.

They wanted to try and find Brownie’s brothers.

Brownie was an evil ship dog in disguise...