The Mystery to Find the Golden Banana 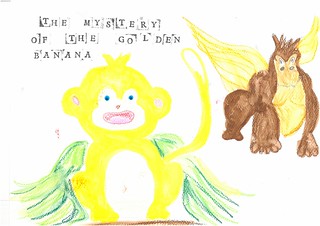 St Damian’s National School, Perrystown, Dublin 12, 4th Class, 23 June 2015
One day Ripjaw woke up outside his tree house. He was sleeping on a branch. His house was built over a lake that had crocodiles in it.

He was awoken by his best friend, a flying gorilla called Clifford. Ripjaw got a big fright and fell out of the tree and into the lake with the crocodiles.

Ripjaw used his wings to fly out of the lake but they weren’t working very well because they were soaked.

“Don’t scare me like that, I need to be in great form to go on my quest for the Golden Banana,” said Ripjaw. 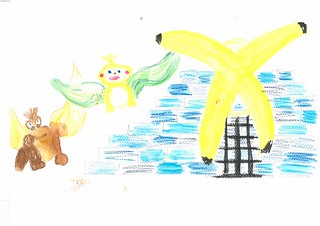 Clifford said to him, “You’ll never find it. It’s impossible.”

“That’s why you’re coming with me,” Ripjaw replied.

“Where is the Golden Banana anyway?” Cliford asked.

“In South Africa there is a cave called The Temple of the Rare Golden Banana. There are loads of booby traps, snares and animals that like to attack flying animals,” Ripjaw told him.

“That sounds crazy, there is no way I’m going,” Clifford said...