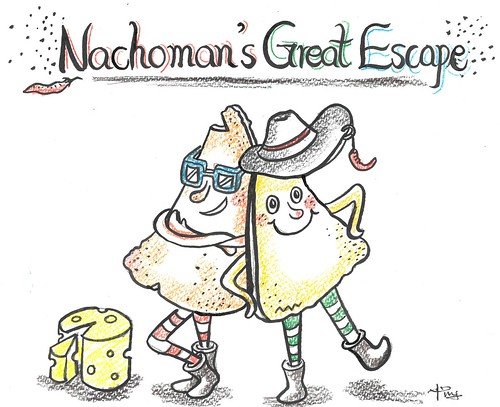 Nacho Man was in his nacho castle thinking up his plan. His idea was to get a unicorn from the stable and ride it on a rainbow to his evil twin brother’s castle, Salsa Castle.

But when Nacho Man went to the stables, there were no unicorns left. His pig, called Oreo, had let them out.

So Nacho Man decided to use his jumbo pet pigeon.

Nacho Man couldn’t ride his pet pigeon, so it crash-landed and he had to ride his big Oreo pig.

When Nacho Man arrived at Salsa Castle, there were guards. To get past the guards, he shot nacho cheese out of his hands.

He didn’t have enough nacho cheese to fly over the guards, so he landed on top of one of them.

“Oh snap!” cried one of the guards.

Nacho Man ran super fast past the guards, but the doors were locked. The guards surrounded him and he got captured. The guards sent him to salsa prison.

The prison was disgusting. There was only salsa dip, no cheese dip. There was even a bucket of salsa beside Nacho Man in the cell. 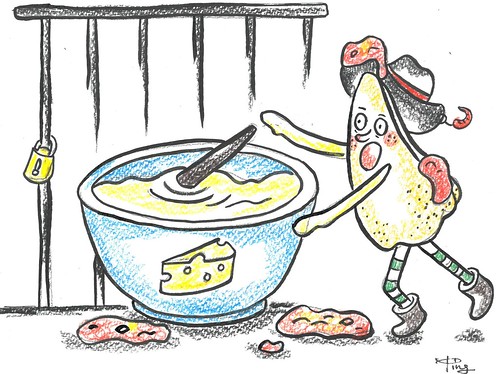 All the other nachos in the cell had gone cold because they’d been there for so long and the prison was -30 degrees.

He saw Cheese Dip shivering in the corner of the cell next door. Oreo the pig suddenly crashed through the wall of the salsa prison.

The salsa alarm went off and salsa sprayed everywhere. The guards rushed in.

Nacho Man burned the cell walls with his nacho cheese. He climbed into Cheese Dip’s cell.

He threw Cheese Dip onto the back of his Oreo pig to get him to safety.

“It’s great to be back!” said Cheese Dip, shivering.

Then the room started to fill up with salsa…