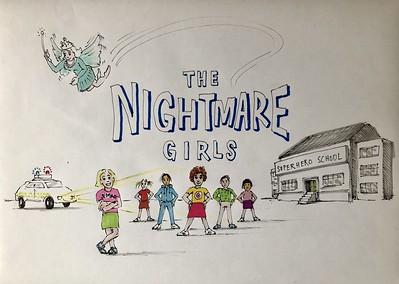 Once upon a time 6 girls were at superhero school !! They were best friends. They met a fairy called the night time fairy. She was nice and kind. The friends never been to fairyland, but they wanted to go there. Just then the news came on."Girls look at this"cried Emma. K. The girls came over and looked at the news. The news presenter said "a fairy came over to the garda station and is giving nightmares to children". Oh,no cried Emma H." That's the nightmare fairy who's saying the nighttime fairy is having nightmares to children" cried Niamh.

"Oh no" cried Emma k,Ciare,Grainne and Clodagh at the same time. We better go and find the nighttime fairy, but before they could Clodagh said "listen to this" oh and another breaking news this fairy said there are 6 girls who are mean and who never ever put on there seat belt. "Oh no Ciara cried shes talking about us. Everyone gasps. They are in an apartment on the second floor of the 25th room, the fairy said. Now the garda are looking for the girls, said the new presenter and that's the headlines.

Now to Met Eireann for the weather. Emma K turned the television off. We have to look for the night time fairy Emma K said. Clodagh began saying she might be in fairy land Ciara went down to her room. She found a box she had never seen before and it was glowing. Come and look at this, said Ciara. All the girls came up to Ciara. She opened the box.

A message came out of the box. It said "Girls old and young come to Iceland. I am here".

How are we going to get to Iceland said Emma H. A voice then came out of the box it said each of you put the necklace with your name on . It will bring to Iceland. All the girls put the necklaces on except Niamh. She was very suspicious about what the message had said so she didn't put the necklace on. All the girls disappeared off to Iceland. Up in Iceland the nightmare fairy was there. I tricked you here called the fairy. All the girls screamed out loud. Even Niamh heard them screaming from home. Niamh then said "Oh no" the girls are in trouble. Back in Iceland the evil fairy was casting a spell on the girls. Their eyes were spinning round like a swirly croissant just being made. Niamh was running around the room but just then she heard a knock on the door. I wonder who that could be, she said to herself suspiciously. She opened the door and she looked out and she saw a fairy with gold slippers.

The night time fairy was wearing a gold dress with light pink on the bottom. She had a gold flower in her hair. Who are you said Niamh. I am the good fairy I was at my home and I was looking at the news and I heard about the bad fairy said the good fairy. We heard it too Niamh answered. Where are the other girls ? Oh Long Story. Tell me it, tell me it. Ok once upon a time all the girls and I were watching the news. Ciara went down to her room she found a box she never seen before and it was glowing. Ciara said come and look at this all the girls came up to Ciare where she opened the box it said "Girls old and young come to Iceland I am there".

The two girls got there warm clothes and gloves on. The fairy said "Hold hands with me and I will bring you and me to fairyland" OK they holded hands swirls of gold danced around them. When they opened their eyes they were in fiaryland "OMG" which stands for Oh My God said Niamh We will visit Queen Titanya and King Oberon said the nighttime fairy. They went to see the King and Queen. The royal carriage will bring you to Iceland and travel underwater said Queen Titanya in a posh voice. We got into the carriage. It brought us to Iceland. There we found the nightmare fairy saying "I will take over the world ha ha ha ha" in a crackling voice. Niamh taught of a plan "If the nighttime fairy is magic and has a magic wand she could make a spell taught Niamh. She told the plan to the night time fairy. The fairy made a magic spell. The girls came over and hugged each other. The nightmare fairy ws never seen again and for the girls they lived happily ever after.