Oceana and the Missing Pearl Necklace 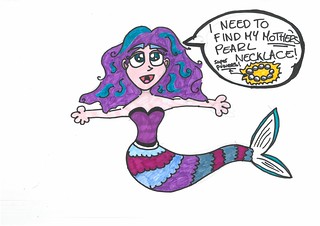 Deep down, under the sea, there lived a mermaid called Oceana who wanted a pearl necklace more than anything.

The pearl necklace gave special powers to whoever wore it. At night, it gave you the ability to see through the dark sea.

It had been her mother’s, but it got stolen by Marissa the mean mermaid. Then Marissa lost it, so now they were both looking for it.

Oceana asked her best friend Poppy the dolphin to help her find the necklace. She swam to Poppy’s pod and she said, “Poppy, stop eating and listen! 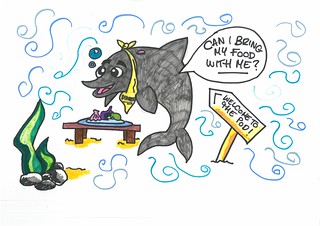 Marissa stole my mom’s necklace and we need to find it but I hear that Marissa is also looking for it because she lost it.”

Poppy said, “Can I bring my food with me?”

“No, Poppy,” Oceana said “Only if you bring me some too.”

Poppy said, “Can we start tomorrow?” but Oceana said, “No! We have to start now – Marissa might find it first!”
They started looking for the necklace at the shore, but they didn’t find it.

They did, however, find a map that told them to look in the Dragon Cave located in the Seaweed Forest. When they got to the Dragon Cave, it was a trap! The seaweed caught their fins and, like quicksand, dragged them down.