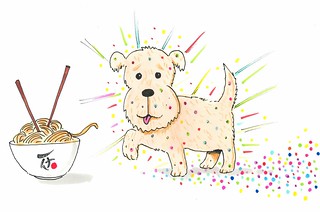 Chopsticks the sparkly dog was running away from One Direction. He was looking for a hiding place. Next he jumped into a rubbish bin.

Chopsticks did not know that he was leaving a trail of sparkly glitter. One Direction found him but as Harry Styles picked him up, Chopsticks woke from his nightmare.

Chopsticks went downstairs leaving a trail of glitter behind him. He saw eggs in his dog bowl. “Oh boy oh boy, do I like eggs!” said Chopsticks, happily. 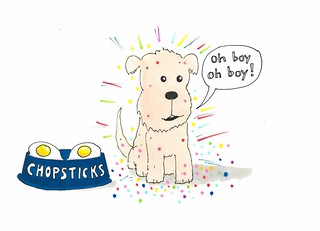 After breakfast, Chopsticks went to visit his best friend, Noodles the dog. He found Noodles running in the park.

“Forget about it,” said Noodles. “I just wanna lie in the sun.” 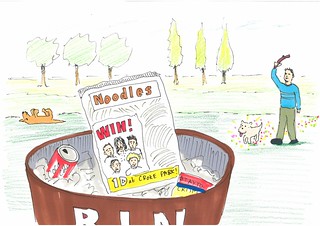 John took the stick and threw it. The stick landed near a bin. In the bin, there was a packet of noodles. Chopsticks took the noodles packet out of the bin.

“Oh boy oh boy, it’s noodles!” he said. Then he saw a picture on the packet: ‘Win tickets to see One Direction in Croke Park.’

Chopsticks dropped the packet in horror and terror...