One Goat One Chicken and One Extra Large Bucket 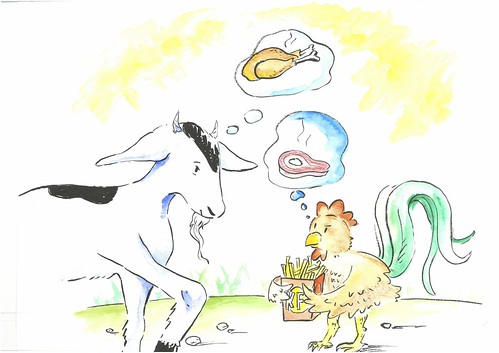 Snoop Frog the goat lived in a rabbit burrow. One morning, he vomited into his cornflakes. This was not unusual - he did this every morning to make them taste better.

Snoop Frog then switched on his flatscreen TV to watch SpongeRob.

Meanwhile, Crispy, the rather large and round chicken, rolled into the burrow.

“Thanks, I showered in deep fried grease this morning,” said Crispy.

“What should we do today?” asked Snoop Frog.

“We should go to KFC,” said Crispy. 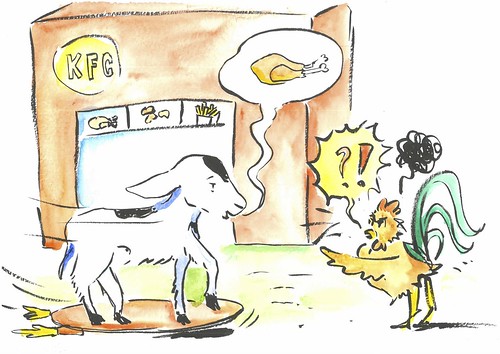 “Maybe we should get some crispy chicken,” said Snoop Frog.

Crispy laughed and pretended to gasp. “How dare you!”

But he wasn’t really.

They made their way to KFC, Crispy rolling along beside Snoop Frog, who was on his hoverboard. They walked in and went up to the counter.

“I’ll have the usual, Barbara,” said Crispy with a wink.

Snoop Frog paid for the chicken and said, “Let’s split it.” 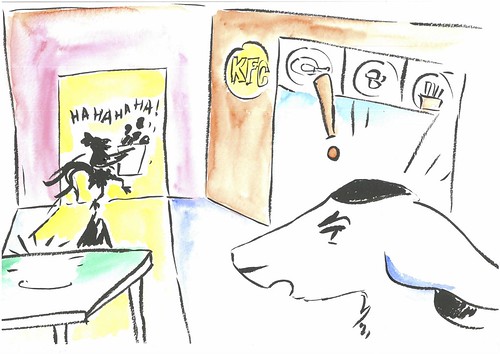 They brought the bucket of chicken down to a table. Snoop Frog needed to use the little goats’ room.

When the bucket was empty, Crispy realised he had eaten his cousin.

“I just ate my fourth cousin, twice removed, Buttery! Didn’t like him anyway,” Crispy said to himself.

Snoop Frog came out -  with toilet roll stuck to his hooves -  to notice that all the chicken was gone.