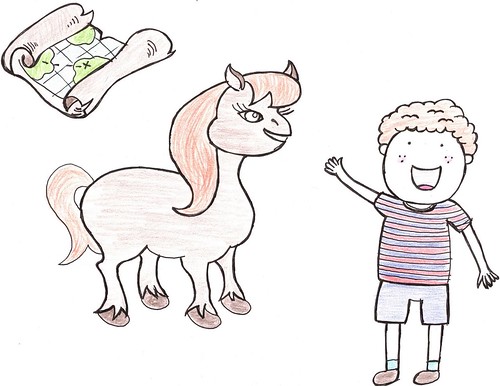 Oslo the horse, the quick healer, is in her barn. It’s 4 o’clock in the afternoon. She is eating -  but not a lot of food. She doesn’t get much food from her owners.

Fred the 4 year old, Oslo’s best friend, sneaks through a hole in the barn, carrying some of the dinner that he just had.

Oslo neighs at Fred. Oslo and Fred have a telepathic connection. They can talk to each other in their heads.

Oslo relays the message to Fred to thank him for the dinner. Fred and Oslo begin to plan their great escape!

Fred is drawing up a map of the entire farm. He shows the map to Oslo.

Once he has shown the map to Oslo, Fred says, “We should hide the map so that my parents don’t find it.” He put the map on Oslo’s nose.

She takes a little gallop and the map flies on to a little shelf at the top of the barn.

“Why are you talking to that animal again?! Get back inside the house!” he shouted.

When Fred goes back inside, his brothers and sisters laugh at him. It’s because he talks to Susan the horse.

Meanwhile, there is a bull who is spying on Fred and Oslo as they hatch the plan.. He sees the map on the shelf...