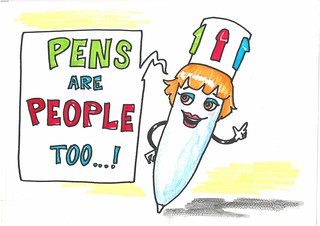 Rutland National School, Dublin 1, 6th class, 14 September 2015
Jack has a test in five minutes and he can’t find his magical pen called Penny. He left her at home.

Jack pretends he’s sick and he runs home to get Penny.

“I was asleep and you didn’t wake me up,” replies Penny.

He gets on his bike and cycles as fast as he can to school. He thought he knew shortcut through the forest, but he fell down the hill and Penny slipped out of the bag. 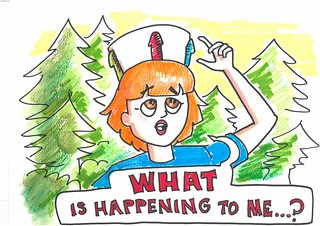 A squirrel comes along and picks Penny up. It bites Penny and her ink falls out. When Penny doesn’t have ink, she cannot talk.

Jack gets worried and tries to find Penny.

Penny has a dream that she is a human. But she has actually turned into a human and was stuck up in a tree!

Jack follows the trail of ink in the forest to a tree. He looks up and he sees a girl stuck in a tree.