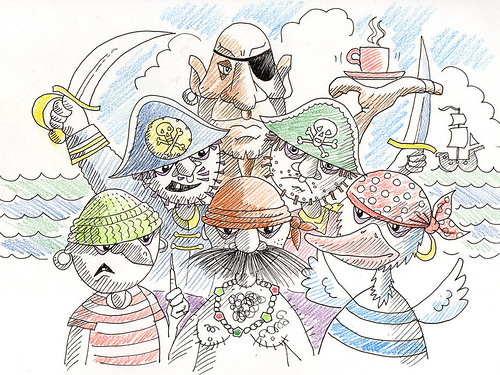 Once upon a time in a land far, far away there lived a crew of salty scary pirates on their ship, The Black Donkey.

Peter and Plexus were the top bananas. They’d met in Pirate School. Peter had a very little brother called Nugget. Boon was very booney, booting people off the ship when he felt like it. Furry had a hairy chest with a gold jewelled necklace. Claw had sharp fingernails. Double Duck Quack Quack was half duck.  He said “Quack quack” after every sentence.  Chef Dusty was the head chef. If he was angry, Chef Dusty would bang his meat cleaver - especially if anyone asked for seconds.

The pirates had many enemies, including King Louis. King Louis wanted to be a real king but he was very mean. He was known as King Pooey behind his back. But Eye Patch Jim was the worst enemy ever because he tricked them....

Peter and Plexus wanted a sandwich and coffee at Jim’s Jelly Deli Coffee Shop. The man working there had an eye-patch so they asked him why he had an eye patch.

He said, “Oh-er I’ve had it since I was small.” They ordered but when the toastie arrived the melted bit was wobbling...ticking.... suddenly…

Peter and Plexus realised it was Eye Patch Jim -  that tattoo should have been a giveaway. They declared, “That was a close one.”

So they bought a fancy machine instead and sat down with the crew and cups of coffee on The Black Donkey. And there was Eye Patch Jim on their radio saying, “I’ll get you I’ll get you if it’s the last thing I do! Aaaarrrrrhhhahaa! ”