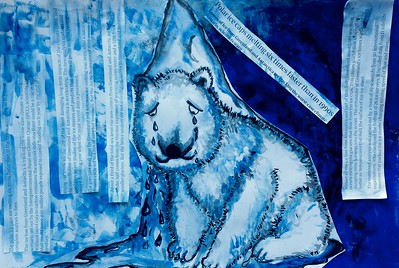 Hi, I am a polar bear. Today another icecap melted and destroyed my home.

I will now tell you how it happened: It was Friday afternoon. My mother told me and my brother to go and catch some fish for supper.

We went down to the Arctic Ocean to catch some salmon or - if we were lucky - a seal or walrus (they are my favourites).

When we got there, we met my best friend Bubbles. He told us that there were no fish left in the ocean and that we might even starve. I asked him, “Why are there no fish left? Why will we starve?”

He said, “The humans are throwing their waste into the sea, which is making our icecaps melt that we use to stand on to catch our fish.”

I was worried now. I didn’t want to die. I knew I had to do something, so I told my brother we had to go back home now. Polar bears are not designed for walking a long distance, so we stopped a couple of times to take a breath. We were now just around the corner from our cave. Finally, we reached our cave. 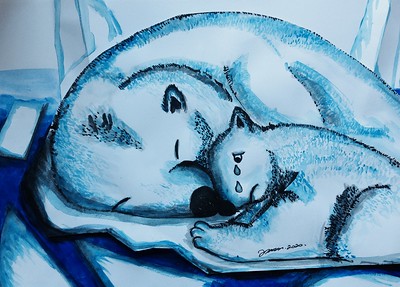 Well, it wasn’t a cave anymore, it was just a pile of rubble. I suddenly realized that Mother and Father were still in there, so I rushed into the rubble, fighting my way past the pointy bits of ice.

Then out of the corner of my eye I saw Mother and father lying on the floor with their eyes firmly shut.

I crawled over to them and nudged then with my paw and let a tear drip down my fur. I knew what had happened, an icecap had destroyed our home and my parents.

All of a sudden, another polar bear came trotting into the scene. He told us that he was going to take us to the human vet and that they were going to take good care of us. 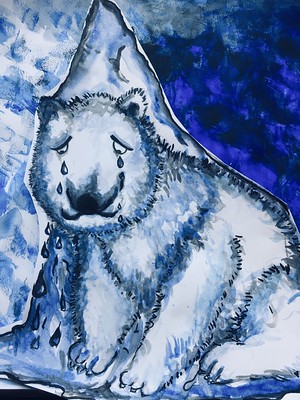 I refused to go because I was not going to go to the people who killed my parents and my home.

My brother went anyway so now I was on my own.

Humans, if you are reading this, please try to stop this major problem or you might even be affected by this.

So next time you see a piece of rubbish lying on the ground think about the polar bears and what you are doing to them so just pick it up or the next time you are going to buy a coffee, reuse the cup.

See, it’s that easy, just a little change and you are saving lives. Now I am living with Bubbles in his cave, its not that bad but I still do miss my family.

I hope you enjoyed my climate change story and will make those changes.