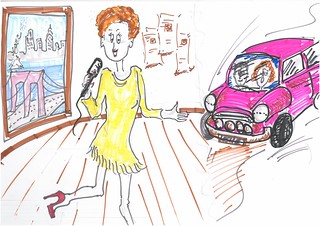 Patsy was at home practising. She was looking up music videos and lyrics. She was warming up her vocal chords by singing scales.

She was always worried about getting a throat infection so she looked after her throat by drinking Lemsip.

Patsy’s best friend was an actor called Lesley who lived in LA. He was a successful actor who often performed on Broadway. One morning, while Patsy was looking online, she found an ad on a flier for an audition in New York. She felt nervous about it but she wanted to do it. Patsy got on the next flight to New York. She packed a blanket and neck-pillow for the flight. She decided to wear a gold dress with sleeves and black high-heels.

When Patsy landed in New York, she skyped her friend Lesley and invited him over to her hotel, close to Empire State Building. “Welcome to New York!” roared Lesley and jumped for joy.
“Thank you for meeting me,” Patsy replied. “Do you know the way to the studio for my audition?” “I think it’s in Tribeca,” said Lesley. “I can give you a lift in my pink Mini Cooper.”

The next day, she arrived at the studio and was feeling a little bit nervous. Her stomach felt rocky. She got a number and was called next. She sang a medley of Adele songs including “Hello”, and “Set Fire to the Rain”.
The two judges were so excited, they jumped up and waved their hands in the air. Lesley was watching through the glass panels of the door. He was over the moon. 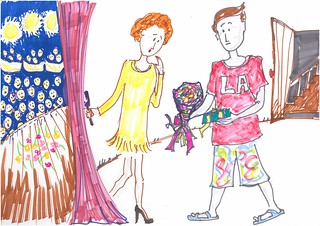 The concert was scheduled for a couple of weeks. Patsy was the headline act. She practised every day. Every night, before she went to bed she rehearsed the lyrics of the songs in her head. She was worried her secret would come out. She’d never told anyone about her stagefright except for her parents, but they were back in Dublin. She couldn’t videochat because she was busy.
The night before the concert, she finally decided to confront her fear and talk to Lesley about it. The two friends had gone for burgers and chips in a local chipper.
“I can’t eat. I’m just so nervous,” Patsy said.

“Be quiet, I’m try to eat. Don’t distract me,” Lesley replied.
Patsy had just finished her dinner and stormed out. She was not going to worry about Lesley or have any distractions. Her main focus was the concert.
The show took place in a concert hall in Brooklyn in New York. It was an old building with red and gold chairs and a purple curtain. Patsy had a brainwave. She decided to ask for some back-up singers. Three back-up singers came out on stage with her to keep her company. They made her feel relaxed and helped her shake out her nerves.
The performance went so well that everyone clapped and threw flowers on the stage.

Patsy cried tears of joy and said, “thank you for giving me this opportunity to come here to New York and perform!”
Just then Patsy spotted Lesley in the audience. He was holding chocolates and flowers...