The Prodigy Boy and a Miracle of Snakes and Ladders 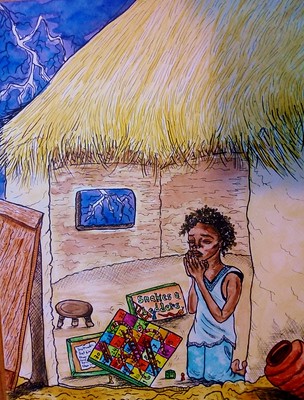 Once upon a time in a faraway land lived a boy named Zimbab.

Zimbab was only a young boy of the age of five when his dad died in a war in 1897. Since his dad’s passing, he had lived with his mam Maria.

They live in a small mud hut just outside a village in Gleaja.

As the boy started getting older, he really wanted a sibling. Zimbab had seen other children in school jumping, skipping and playing with their siblings. Zimbab just missed the company.

One day when his mam came back from work, she had in her hand a big dusty old cardboard box.

His mam replied, “This is the toy your dad used to play with when he was a child. Now I’m giving it to you to look after for generations, but my son be careful with it. It was very precious to your father.”

A tear rolled down the boy’s cheek. He had never had a toy before. He never even seen a cardboard box in his life.

The boy replied, “Don’t worry, Mama. I will take great care of it.”

After their supper, Zimbab sat down and started opened the cardboard box. It was a regular box, but inside it held something truly special.

Once he got the box open, Zimbab tipped it on the side and out came a square-shaped plank of plywood, with brightly colored snakes on and little squares with numbers. There were also big brown wooden ladders, drawn in very finely with a small ink pen.

Also laid in the box was a sheet of paper with instructions on it.

The boy began reading it. After a while, he began to start playing it. As he had no siblings, he moved the other counter himself, his arm was getting quite tired of moving two pieces. How he wished he had a sibling, maybe just one or even two siblings would be nice.

Suddenly, out of nowhere, a streak of lighting hit the mud hut and then a strong wind from outside came in. After around eight minutes, the wind and lightning calmed down.

The boy began to play again. He was just about to move his imaginary sibling’s piece but before he could, the dice on the board started rolling around the floor ever so slightly. The dice moved by itself. It rolled a 3.

He was just about to move the counter three spaces forward but before he could even flinch, it started moving three spaces all by itself.

“This is a miracle,” said the boy.