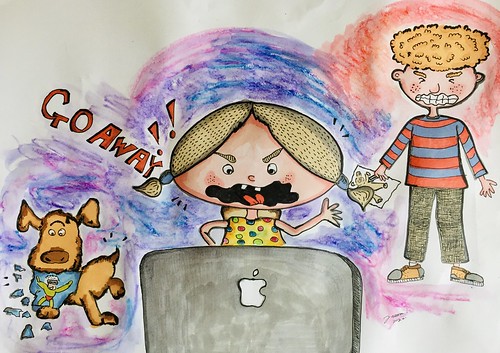 Dan trudged around his room in a temper. He was bored.

Dan’s dog Frank had chewed up his comics, his friend Mason was at his grandad’s house learning how to be a spy, his rugby ball was punctured, his brother had hogged the TV and his sister had hogged the computer. She wouldn’t even let him have one go on Snake Master’s Revenge 2, his favourite game ever!!

Cara always hogged the computer, she said it was for her homework but really she used it to watch videos on YouTube.

If he could just distract her for one second, then maybe he could have a go. But really, his greatest wish was that he and Cara could play together.

Dan went into the playroom, got some paper and drew a teddy bear. He asked Cara would she like to draw one too so they could stick them on the fridge. Cara sneered at Dan, “That sounds like a stupid idea, I’m not getting off the computer, go away!”

Dan was bored and he really just wanted his sister to play with him. “Do you want to go on the trampoline?” he said.

“No, still not getting off the computer!” she said. 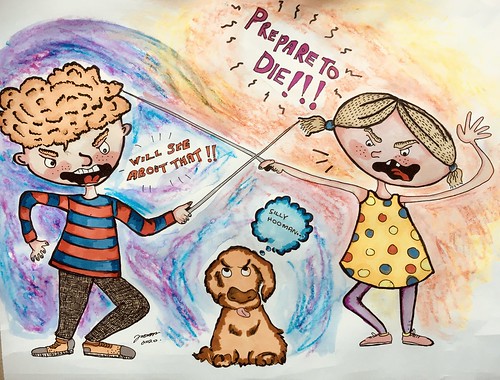 Dan had a brainwave, he knew his sister loved fencing and she thought she was the best in the whole school. She finally agreed.

Cara got the first point but that did not stop Dan. He did a flip over Cara and got a point. It was 1-1.

He started to have to retreat because of Cara’s blows.

Just when Cara was about to score her second point and win, Dan threw her sword at Cara and she did not see it and he got a point.

As he jumped on the computer, Cara screamed in pain.

She went to the hospital and found out that she had broken her arm and couldn’t play on the computer for ages.