Rex, Hammy and the Annoying Goat 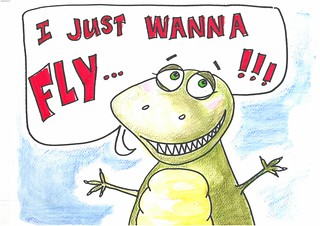 St Paul’s Senior National School, Ayrfield, 4th Class, 16 September 2015
One day, Rex the mini T-rex and Hammy the flying pig were having a walk in the park.

Suddenly, Rex saw a goat. He jumped up into a tree and hid.

“Rex, are you supposed to be up there?” asked Hammy. “Do you need help getting down? Why did you climb up the tree? It’s only a goat.”

After a while, the goat walked away.

Rex finally came down from the tree. But the goat came back and chased him out of the park. 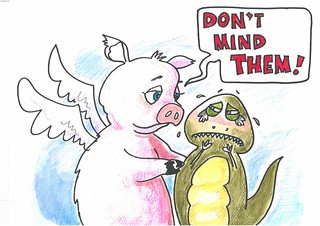 The next day, Rex got on the bus and sat next to Hammy. The people weren’t afraid of him this time, because Hammy was there.
At the next stop, there was the goat waiting to get on the stop.

When the goat got on the bus, Rex got scared and everyone was laughing at him.

The goat chased Rex out of the bus. He was so scared, he started to fly a little bit. And then he went higher and higher and got stuck on a mountain.

Then Hammy had to go up and help him. He found Rex crying.

“There was a goat on the bus and everyone started laughing at me,” shouted Rex angrily.

“Don’t mind them,” said Hammy. “they’ll get used to you soon. Do you want to hold my hand and try to fly with me?”