The Rise of the Pope King 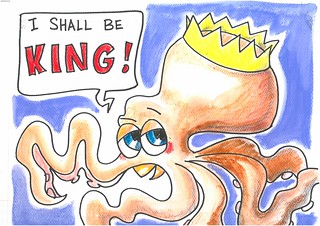 Otto the Octopus is just an octopus who wants to become the Pope King of the Sea with the help of his sidekick, Otto Jr the squid.

To be a pope king means to live in Atlantis, to have the biggest mansion and to eat first of everything that the other fish catch.

The current Pope King is the merman called Merman.

Every morning, before the mermaids wake up, Otto puts rotten fish in the Pope King’s food. The mermaids are the security guards to the Pope King. Otto is afraid of them because they go around tickling other fish.

“Yoo hoo! Tickle, tickle in your sleep!” they say. 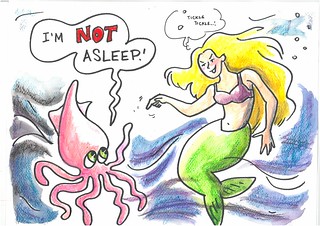 The more the mermaids tickle the fish, the more the fish become paralysed. The laughing of the fish gives them power.

“We have to stop this problem,” says Otto to Otto Jr.

“Yes, if we don’t stop this I’m going to run away to the Mediterrean Sea. Don’t tempt me!” replies Otto Jr.

Otto Jr continues,“We need to go to Mr Blob, the wise blobfish, to ask for advice.”
They swim to Mr Blob’s coral reef.

He tells them, “Do to the mermaids what they do to the other fish and see how they like it. Go to the Pope King’s castle and get his watch and bring it back....”