The Robot Who no Longer wanted to be One 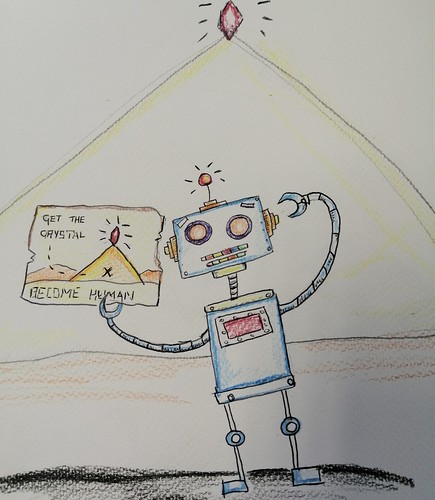 Zobert had been on this planet for way too long. He originally did not like his old planet, but strange things are happening and he did not know what.

He decided to go to the human world. He needs to find a new friend. But how is he going to do it?

But in the middle of space, he got hit by a rock that was wrapped up in paper, that had a pyramid with a crystal on top of it, with a map that said ‘get the crystal and you will become a human.’

‘Where can I find a pyramid?’ thought Zobert.

He decided to head West where there was a planet that was called Mudball. On his way he saw this electronic device.

This device is called the app store, now turn on Spotify and put on Just Got Paid.

When he put down his phone, he sees a vegetable. He thinks to himself, ‘what is this strange creature?’

‘My name is Vegetarian, but call me Terry.’ 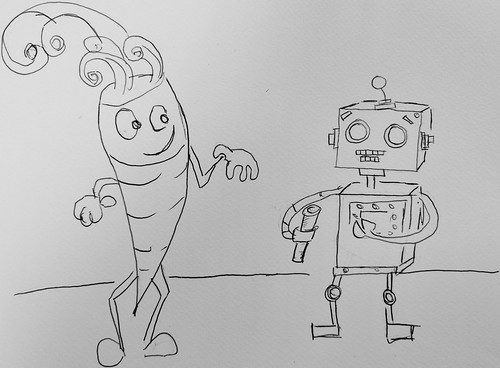 And Terry said to Zobert, ‘try this vegetable, and you’ll like it’.

He hits Terry away and floats by.

So then, Zobert pressed a button on his chest, and he automatically puts his hands out and his butt turns into flames and he crashes on Earth.

He landed right next to Egypt, but he was in the middle of the river Nile.

There’s something shining from the top of the tallest pyramid, I think it’s the crystal.

Sadly, there was one thing standing in his way, a baby with his army of other babies who was also looking for the crystal.

And they were all driving baby-mobiles.

Zobert said, ‘what are you doing with the babies?’

‘You betrayed me, so now I’m going to betray you and get the crystal!’

Zobert chased after him but they were too fast, so he stole a baby-mobile and got the crystal...