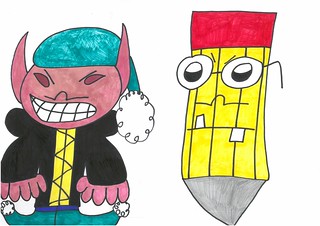 Once there was an evil elf named Stonky who lived in a place where no one could find him.

Stonky’s best friend was Billy Bob Jones, an evil pencil who could erase anything.

They lived in a secret base and they were plotting an evil plan: to capture Santa and take over Christmas.

Stonky had never in his life had a Christmas present.

“Nick! I thought he was evil because he’s my cousin but he’s always keeping us from getting to Santa,” shouted Stonky to Billy Bob Jones. 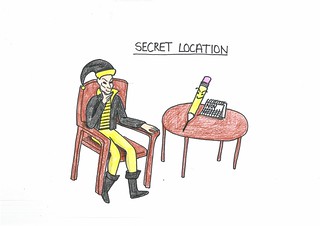 “Well, maybe Nick really is evil but he’s pretending to be good to get close to Santa,” replied Billy Bob Jones.

Stonky and Billy Bob Jones looked at the calendar and realised it was only a month until Christmas. 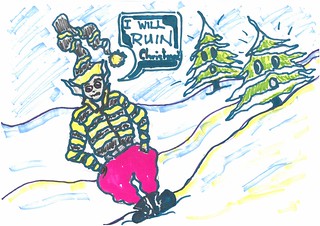 “We better start getting to work,” Stonky said.

So Stonky and Billy Bob Jones slid down the Twister Tube to their secret workshop lair and planned how to get rid of Kevin the Good Elf and Nick once and for all.

Stonky said, “We need to locate Kevin and Nick and you must rub out Kevin’s mouth.”

Billy Bob Jones said, “I put a chip on him the last time I saw him.

All we need do to find him is for me to press this button...”