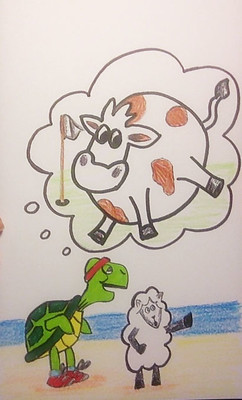 Timmy the Turtle was in Australia on his holidays. He was down by the beach practicing his running.

The wolves from South America usually knocked him down on his shell. Timmy was happy to get a break away from them.

His best friend is Big Fat Cow but he is at home in Ireland and he really misses him.

There was other animals trying to tip him over on his shell too but BABA the Sheep was going to help Timmy the Turtle.

Danny the Dog saw Timmy and thought he was a green ball and started to play with him.

BABA the Sheep came along and said, ”Stop playing with him he’s a Turtle, not a ball.”

Timmy was relieved and said to BABA, “Thank you, I really appreciate it.

I wish I could run faster than a rabbit?”

BABA the Sheep said, “Why?”

“So that can I run away from dogs that think I’m ball.”

BABA said, “I can help you train to run away from dogs.”

Just then four vicious dogs came running down the beach and they were barking . . .