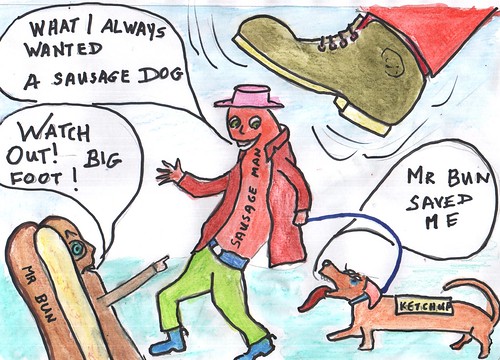 Once upon a time, there was a man called Mr. Sausage.  He had a side kick called Mr. Bun.

Mr. Sausage lived in a sausage house in the country in California.

His greatest wish was to have a sausage dog.

Mr. Sausage had it all planned:  to make a sausage boat out of his house and sail to Ireland.  His mission was to find a sausage dog!

He knew he could find dead sausage dogs in a graveyard, so he bought a big shovel.

He went to Shankill graveyard and started digging.  He found a grave that said: “Miss Ketchup the Sausage Dog buried here”.

He called Mr. Bun on his sausage phone and said:

“I need you Mr. Bun – I need you to wrap yourself around a dead sausage dog and bring him to life”

“You’ve wrapped yourself around so many dead dogs before, it will work this time as well!”

It was a wet night in Shankill graveyard when Mr. Bun wrapped himself around Miss Ketchup, the dead sausage dog…