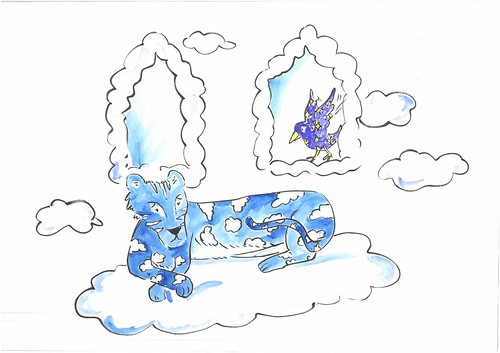 Sky the Blue Tiger lived in her cloud castle in the sky. She felt lonely because no one else lived around her.

From her cloud castle, she had a view of the whole kingdom, including the Apple Castle.

One day, Sky looked down at her leg and sighed, because it had clouds instead of stripes. She decided to go buy a new outfit that would make her look like a regular tiger.

As she was leaving, she saw a raven outside her window. This raven was not like other ravens, because he was purple and had patterns on his feathers.

But the raven was upset by this because he thought Sky was saying she didn’t like his outfit.

Tiny the Raven replied, “No, I will never get off this windowsill!” 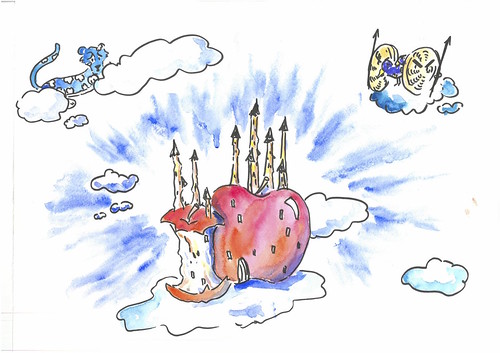 As she went to leave the house, she realized that her special pattern of clouds gave her the power to fly!

She thought about the raven, and went back to him.

She said to him, “Actually, we have a lot in common. We can both fly!”

Tiny the Raven said, “How is that possible? A tiger can’t fly!”

“Well I can fly! As long as I’m not near the Apple Castle,” Sky replied.

Tiny and Sky became friends, and Tiny decided to go with her to get the new outfit after all.

On the way there, Tiny stepped in a hole and the apple pie guards from the Apple Castle captured him.

He was taken back to the Apple Castle and there was a very mean cookie there.

Sky wanted to go find her friend, and flew up in the sky to look for him. She noticed that there were pie guards shooting arrows from the castle.

She was scared, and tried to blend into the sky. She knew that the queen of the castle would steal her powers if she went in to save her friend, but she knew that she needed to save him…